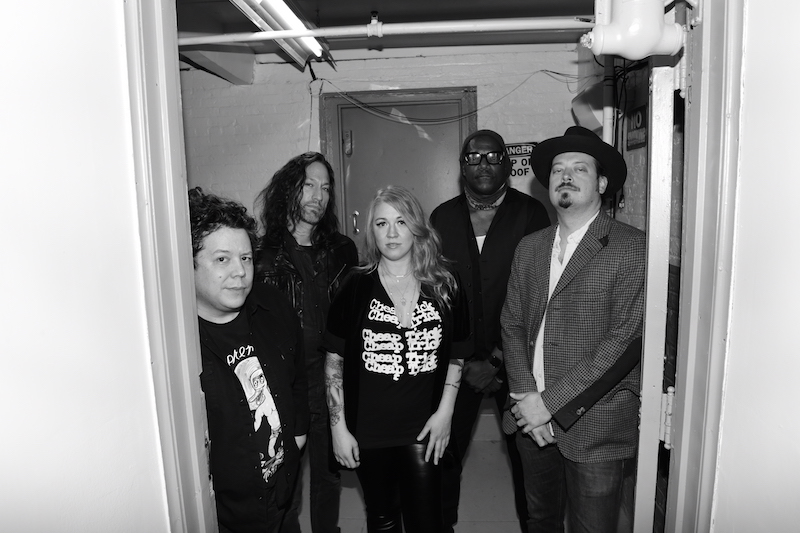 “It was right after Mardi Gras and there was still glitter, beads and pieces of costumes in the streets, littering the wet, black pavement,” says frontwoman Lizzie Edwards on the making of Lizzie & The Maker’s new ethereal indie roots track “Mermaid,” released today and produced by renowned producers Reeves Gabrels (David Bowie, Tin Machine) and Mario J. McNulty (David Bowie, Prince).  “I was nursing a broken heart and just started journaling as I was walking around. Pete’s Candy Store is like my home away from home, so I went there for solace, old friendships, and just started writing what I saw around me to try to process why my relationship with this person had suddenly shifted from close to distant.”  The accompanying music video (also released today) was mostly filmed at Art Factory Studios in Paterson, NJ and reflects the somber yet powerful sentiments behind the track, “emerging from a dark cave and going toward the light,” Edwards says.  After working out some initial instrumentals, Edwards brought the track to guitarist and songwriting partner Greg McMullen who turned the slow blues chord progression into an “amped up Sharon Jones & The Dap-Kings vibe.”  While sitting at the bar and listening to the track, Edwards drew inspiration for lines like “homemade dynamo” (Fireball Whiskey) “old crow voodoo” (Old Crow Bourbon) “two hearted pale boy” (Bells IPA) that eventually became the opening lyrics. Diving deeper into the lyrics she was suddenly inspired by the Kate Bush song “Running Up That Hill” but instead of making a “deal with God” like Bush’s song suggests, Edwards wondered what it would be like to “switch places with the heartbreaker.”

After Brett Bass (Gregg Allman, Bernie Worrell) and Steve Williams (Sadé, Digable Planets) added in their rhythm section and Rob Clores recorded what Edwards likes to call his “space alien sonic wizardry” with swells and textural effects, they brought the demo to Mario J. McNulty and Reeves Gabrels, who instantly recognized it as the first single off the band’s forthcoming album.  “Mario and Reeves had me sing the melody differently from how I usually perform it,” Edwards recalls. “It was a soulful, powerhouse vocal, but they wanted me to lay back a little bit on this one and show vulnerability. It was definitely a challenge to not belt it out, but it gave me somewhere to go and the melody a chance to build, which is so important!”  With the help of these renowned producers, Lizzie & The Makers is prepping the release of their formidable new sophomore studio album due out later this year with “Mermaid” being the first track to come off the collection. Recorded at Mission Sound Recording in Williamsburg, Brooklyn, the new music threads shoegazey, psychedelic layers throughout its core. “I think we’ve been on this kind of ethereal tear,” mulled Edwards. “It’s almost like when we wrote these songs they went through a David Lynch portal, they and came out a little bizarre.” Infusing elements of art-rock, dream-pop, and a celestial atmosphere Lizzie & The Makers has spawned something entirely their own.