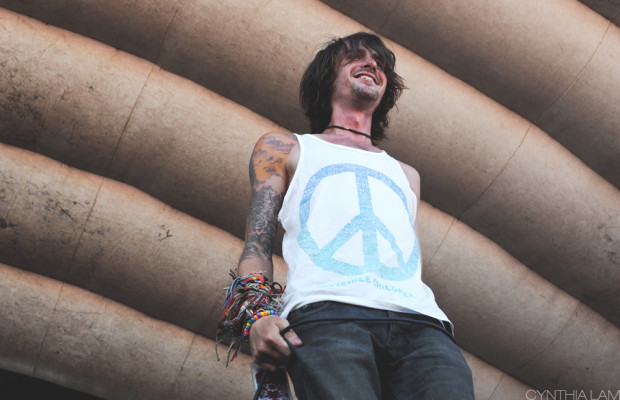 What has the feedback been like so far from your recently released self-titled album?
Everything has been wonderful so far. It’s been great, most of the reviews I’ve read and comments online seem to be pretty positive. That’s just like icing on the cake because more than anything we were really happy with this CD and we’re really proud of it, we love it. The positive feedback, kids at shows singing it with us, that makes it even better. It’s awesome.

Describe the differences between this album and your previous ones.
It’s a whole lot different. With the last album it was a big learning process for our band and we were on a major label for the first time. They had us to co-writes and such. The whole thing was a very cool experience, it was neat but there were some frustrating things about it. We kind of had to end up compromising a lot of things along the way and in the end we had an album that there were songs that we loved, but we felt like we could have made a better album. With the new album, the self titled one, we just sent in, the five of us in a beach house in Florida and wrote the whole album, then recorded it. It was a way that worked much better for our band. The album is a bit more genuine and you can that we care about and love it.

Where do you draw inspirations for songs?
We spend a lot of time on the road, the majority of the year, and we have acoustic guitars so we sit and try and work on song ideas and just get a bunch of ideas together and then we’ll bring the ideas and work on them as a band. Most of it is just about life experiences and for this album the past two years of my life and the people who have had a big impact.

If you had a chance to record with any artist or producer who would it be and why?
It’s hard to say. In my mind right now I kind of want to keep going back to Kenneth [Mount] and Zack [Odom] just because there’s no gamble. We know what the experience will be like and that it will be a great one because it’s so awesome to work with those guys. I think we plan on hopefully going back with them.

Some musicians and bands find it tricky because people tend to judge them by the song title. How do you come up with song titles?
We honestly try not to worry about it too much and just kind of name it whatever we want and kind of have fun with it and that’s why we have a lot of the long song titles.

How many songs don’t make onto your albums?
It depends, a handful, anywhere from five to maybe ten songs that don’t make it onto the album. Some of those have ended up becoming other songs or b- sides like “Terrible Things” and “Amber Lynn”, songs off of Valdosa EP.

You’re currently on the Noise Tour. How has the turnout been so far from the kids?
It’s been great, there’s been a lot of people coming out to every show. People are singing along to the new stuff and that’s a great feeling. So many people are still coming out to see us, to support us, hang out and it really means a lot to us. We’ve been in this band for six years and it’s kind of inevitable that one day there will be a decline. So far it hasn’t really happened and hopefully we can keep doing this for a long time.

At the Anaheim date of the tour, you were giving away bracelets while performing. Is there a story behind that?
We just have these bracelets that say Bangarang on them, and a lot of people don’t understand what that’s from so we decided to explain it on this tour and just have fun. Bangarang is from the movie Hook which is my favourite movie. We used to say it and joke around with each other before every single show we played.

Have you pulled any tour pranks yet? Any that you plan to pull on the other bands?
Not any pranks yet but I’m sure there will be on the last night in Jacksonville. We tend not to go too wild with it, we try and do funny stuff. Sometimes it gets too intense. It’s always fun but sometimes it can compromise the show a bit.

What is your favourite thing to do during your downtime on tour?
It depends, read, play video games, play guitar or mess around. Hang out with the people we’re on tour with, there’s always a lot of stuff to do. We stay pretty busy throughout the day. There’s normally a lot of things we have to do but on the downtime it’s always nice to chill and relax.

Do you find that running on a specific schedule hard?
Our schedule now actually isn’t so bad because we’re touring in a bus so you get a good nights sleep every night and you don’t have to drive and we stay pretty busy throughout the day. We like being busy, it feels like we’re working hard and accomplishing stuff. It really isn’t so bad compared to the earlier years of touring when we were in a van.

If you could turn back time and do one thing differently what would it be and why?
I honestly doubt that I would change anything. It’s really hard to say, you never know how things could have turned out and you never know which decisions were good or bad necessarily. You shouldn’t regret things too much and I think we’re in a really good place and wouldn’t change anything. We need to make those mistakes to learn.

What can we expect from you guys in 2012?
Probably just a lot of touring. This album has just came out in October so it’s still pretty new and I’m sure we will be on the road both in the US and Internationally.