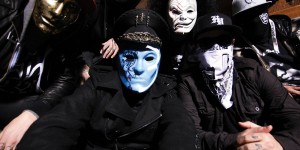 In the last week our interviewer Roxanne Asthenia got the chance to catch up with Hollywood Undead to talk about the band and their time on tour. Read it below and be sure to check out their remix album for American Tragedy Redux here.

What is Hollywood Undead all about? What made you decide to start a band?
We’re all about Brown pride y’know, our folks are Mexicans –no, I’m just kidding (laughs) We’re just trying to make money and have a good time at the same time, pretty much living the American dream right now.

How much do you think you guys have grown musically since the formation of the band?
It’s one of those things where you write your first album, your first song and you tend to hate them as you grow older. A lot of bands say they hate their first record but they like the 4th or 5th one. We’re like that but I feel like a lot of things have changed since the beginning.

You’re currently on tour with Asking Alexandria, We Came As Romans, D.R.U.G.S, and other bands. What has it been like so far?
It’s been great. Our band does better with metal bands. It’s cool to tour with bands I listen to so I have more fun every night watching them get worked up.

How would you describe the atmosphere when you guys are on stage performing a show?
A lot of alcohol, a lot of good vibes and a whole lot of fun going on. We just try to put on as good of a show as possible. We drink before shows and we hang out with each other. Metal songs blasting out of our throats for hours straight, people enjoy it.

Have any tour pranks happened yet? Are you planning on pulling any towards the end of the tour?
No, I’ve always heard that but I’ve never seen it. I think it died in the 80s, I think people are more sensitive nowadays.

Really? I’ve actually heard a lot of stories of bands pranking one another on tour.
Well, it never happened to us. Everyone in my band is like 6 foot tall and we’re like bigger dudes so no one’s ever pranked us before (laughs) We do it to each other but not to other bands.

What’s the weirdest thing a fan has ever said or asked you to do?
A 16 year old girl asked us to have group sex with her. I felt kinda weird like I should call her mum or something.

So you know how bands are always going through interviews and they have to face the same questions over and over again. What are some interview questions you find most annoying?
The mask. People ask us why we wear masks and we have answered that question like a thousand times. I think Corey from Slipknot said more bands should wear masks or I don’t know, someone said that. I really don’t think wearing a mask is that big of a deal, it’s just entertainment like people are all ‘’why do you wear a mask?’’ like who fucking knows.

You guys are releasing a remix album in a couple of days. How did that idea come about?
We wanted to come up with new music, keep people’s attention. We listen to remix albums of other bands and artists as well and we thought to ourselves that we’ve never done anything like that before so we just thought it was a good idea.

Do you have any tattoo stories you’d like to share?
Oh fuck. I have a friend from Canada who has a rock on his arm that says USA. He fell asleep while he was getting tattooed so my other friend tattooed USA across his arm and now he’s back in Canada with that tattoo, it’s pretty funny.

What are your recording and writing process usually like?
The band usually individually writes and then we bring each of our songs and collaborate on them. One person has an idea and they come together with everyone else on it. On our bus, we have a mobile recording set up. Everyone jumps in with input. Everyone writes lyrics but with different styles. Charlie Scene writes like fun and party songs, Johnny 3 Tears write dark and heavier songs, everyone kinda does their own thing.

The genre of your band is really interesting. What kind of music did you guys listen to growing up?
Growing up, I listened to a lot of 90s hip hop. Typical west coast stuff like Dr. J, Eazy- E, some of the other guys in the band listened to Nine Inch Nails. As I got older at around 16, I started to get into more metal and rock. It was kind of the opposite really, most people grow up listening to rock while I listened to rap and switched over afterwards.

If you were a character in a movie or a show, who would you be?
Peter Griffin from Family Guy because he’s a fat piece of shit. (laughs) Ahh, I don’t know. I saw a Halloween costume the other day and someone was Kickass, that movie was cool. I’d probably be Bart Simpson. I have a slingshot, I bring it on tour and I shoot bottles on it so people call me Bart Simpson.

So you guys are going on The Buried Alive tour soon. How does it feel to share the stage with national acts such as Avenged Sevenfold?
It’s cool for us. They’re from the same area we’re from and they’re some of the nicest dudes I’ve ever met. It’s humbling to meet a band the size of they are who wants you to tour with them so the whole experience is really cool for us.

What are some hobbies you guys have?
We all do different shit. I skateboard a lot. A lot of the things you do on the road to keep yourself sane, some of us draw, some of us write music on the side. I have a horror website I just started to keep myself busy. It’s called scaredornot.com. I’m into comedy so I take the lighter side of horror and make like fake news. It’s kinda like The Onion but with hormones or getting erected, something funny like that.

If you could choose any profession outside of being a musician, what would it be?
That’s probably the best question I’ve ever had because I ask myself that every day. Oh god, I could be in a band forever. I want to be a fisherman because I’m staring at a lake right now so I’d probably enjoy fishing. (laughs) I don’t know, I can’t think of anything, I’ll be in another band is what I would do.