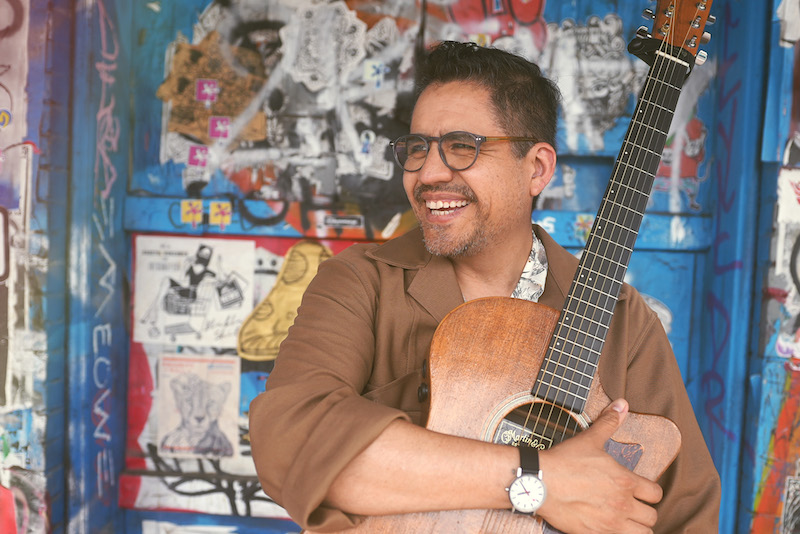 Few can digest and spit their pain back out like Ricky Mendoza.  A veteran storyteller with a brazen voice, he asks the big questions, leaves no stone unturned, and invites his audience to brave his aching heart with him.  Though he grew up entrenched in classic punk bands like Bad Religion and Against Me, Ricky enjoys the simplicity of an acoustic guitar.  While still maintaining the fury of his influences, the stomping, anthemic melodies come naturally to his songwriting.  But this isn’t his first time hooking people’s attention.  With two feature films under his belt (El Escape De Los Santos (2005) and Ash Wednesday: Capitulo Unus (2007)), Ricky has always been a master of world building and crafting stories that need to be told.  However, after years of telling others’ stories, it was time to look inward and share his own.  He recently released his latest single “I Just Died”, a nostalgic tale that explores the concept of death from the unique perspective of a soul that has recently left its earthly body.  It’s the second single from his forthcoming album The New Hurt, out August 13th.

“What would happen at the moment of death?  What would you feel, see or touch?  This song explores this and views death from the perspective of the soul.  I needed it to feel surreal and somewhat creepy but at the same time it’s a very sweet and nostalgic song.  In addition to the acoustic guitar, it is accompanied by a vibrating theramin sound, to really give that paranormal feel.”

On his debut album, Angst, Ricky explored the forces that pull us down and the pain of a long-term relationship gone sour.  Highlights like “Marmalade” and “Risktakers (Take It All)” remind him of the importance of pulling yourself up and wiping away the tears since, frankly, what it all boils down to, is about overcoming hardships and learning from them.  Two years later with his sophomore release, No One Has Their Shit Together, the demons persisted, but he learned about the importance of forgiving one’s self.  Half spoken word and half folk-punk gold, NOHTST is a journey of self-love and acceptance that expands upon the world and sound he’d already crafted. “And even though I can’t help but notice my emptiness,” he sings on the album’s transition song (“Explaining My Loneliness”), “this feels like a damn good time to get my shit together.”  After five years, Ricky now prepares to release a new album, The New Hurt, onto a battered and bruised world in need of love, understanding, and catharsis.  A more lush production filled with instruments and textures he hadn’t yet explored, Ricky’s third release is the culmination of when an unstoppable new love meets the immovable force of loss.  The years since NOHTST changed his perspective with a new, blossoming relationship, where he “threw [himself] to without a safety net.”  But with the ups, came the downs as this album was also his chance to process several deaths in his personal life.  Throw in an isolating pandemic that we’re now carefully emerging from, in his own words, “the timing feels so damn right.”  The lead single “Lauve” was released on June 18th.

“”Lauve” is what it feels like to be in a surreal and dark love at the same time.  In essence, it’s a love song about a beautiful person I had just met.  We were two devastated souls that had been battered with painful relationships and it’s hard to just let go and trust someone else. It is scary to love, but once the fear is gone, the rewards are endless.”

You can connect with Ricky Mendoza via the following links: