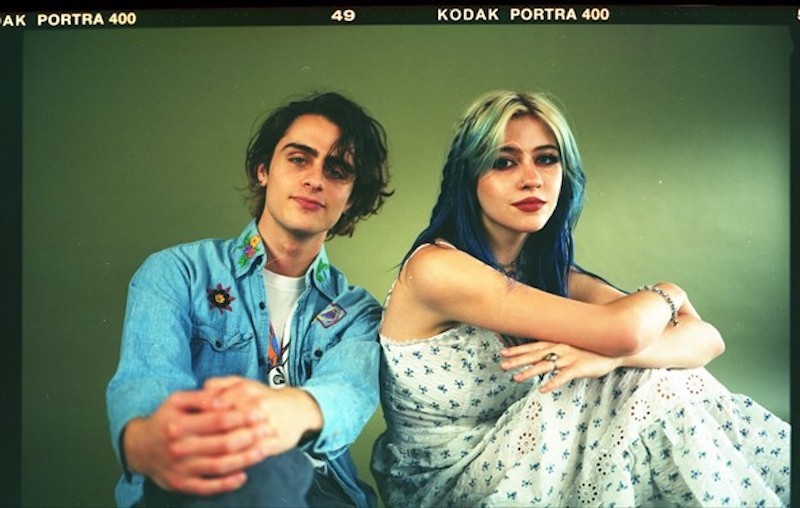 Buzzy Atlanta-based duo  Lowertown  have just released their new EP The Gaping Mouth, the highly anticipated follow-up to 2020’s Honeycomb, Bedbug (their debut release on label home Dirty Hit).  Before heading back to Atlanta for a hometown set at Shaky Knees Music Festival on October 24, the band is playing a special EP release show at Baby’s All Right in Brooklyn this Sunday September 19. You can find tickets HERE!  Lowertown traveled to London to record the new EP with revered producer Catherine Marks, known for her work with Foals, St. Vincent, Manchester Orchestra, Wolf Alice and more.  With this release, Lowertown proves their continued progression from high school DIY music-makers to certified lo-fi darlings. The Gaping Mouth  EP  thematically revolves around living in a void, influenced by the isolation experienced by  Olivia  and  Avsha  during the pandemic.

“Before leaving to record, it was definitely a difficult period,” said Olivia. “We were writing music unsure of if reflected us moving forward as people. We knew we wanted to record for this project, but the uncertainty in ourselves left us feeling burnt out. The period before actually stepping into the studio for the first time was incredibly nerve-wracking. We had never recorded in a real studio or even written music in front of other people besides ourselves. Eventually, when the time came, it was a completely different experience than we were expecting.”

“Being able to work with Catherine pushed our musical ideas and ourselves as a whole,” added Avsha. “Meeting somebody who knew exactly what we wanted out of each song was something really special and something we haven’t experienced before. This EP represents the relief of expressing those emotions that felt stuck in their place as the pandemic continued. It represents letting go of some of those thoughts that grew more and more significant at the darkest points of the pandemic and represents ourselves truly moving forwards as people.”

Over the summer, Lowertown released the EP’s title track and its coinciding video to critical acclaim from The Guardian, and they were named a best new artist by Pigeons & Planes,  ‘On The Rise’ by Line of Best Fit and an artist to watch by Ones To Watch simultaneously. The song also landed a coveted spot on Pitchfork’s ‘Pitchfork Selects’ Playlist last month, and can be heard on KROQ’s ‘New Arrivals.’ Last month, Alternative Press gave readers a first look at Lowertown’s second single from the new EP, “Seaface,” calling the song a “progression toward a new level, both lyrically and sonically.”  Lowertown is comprised of 19-year-old bandmates and best friends  Olivia Osby  and  Avsha Weinberg, who have quietly built a cult following while garnering praise for their moody riffs and lyrics about the trials and tribulations of becoming a young adult. From ad hoc, folky lo-fi soundscapes to more lacquered offerings,  Lowertown’s  unique brand of indie music is at once nostalgic and futuristic, chaotic and orderly, wise and young.  Olivia, the self-taught singer-songwriter, and Avsha, the classically trained multi-instrumentalist, achieve success in their music through their symbiotic collaboration style, imbued with joy and respect. The duo first met in math class  in high school discovering their shared love for DIY music, and began recording, producing and mastering  all of  their tracks from a basement studio . Their music mixes lush instrumentation, samples, synthesizers  and homemade ambiance paired with moody vocals and lyrics.  Their debut LP  Friends,  released in 2019, garnered millions of organic streams on  Spotify. Influenced by the likes of  Aphex Twin, Modest Mouse, Radiohead, (Sandy) Alex G,  and  Animal Collective,  Lowertown  has already made waves in the US and UK, having drawn acclaim from  Pigeons & Planes,  The FADER, Ones To Watch, The Guardian, Far Out, Alternative Press, Notion, The Forty Five, DIY, Dork, BBC Radio 1  and more.  You can connect with Lowertown via the following links.  Photo credit: Shamshawan Scott.