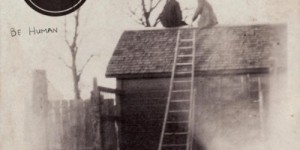 Brighten’s new EP Be Human released on March 23rd 2010 with a big bang. This trio consisting of Justin Richards (guitar, vocals), Jimmy Richards (drums) and Alex Draper (bass) announced that they were headed into the studio the month after May 2009 to record what turned out to be an amazing EP,Be Human. With A Rocket To The Moon on a full time touring schedule, Justin Richards (also guitarist of A Rocket To The Moon) Brighten was put to a hitaus. When Brighten announced that they were releasing a new EP, Be Human, fans across the world were at the edge of their seats for this highly anticipated release.

Be Human falls nothing short of it’s expectations, and to call it’s amazing would be an understatement. It features six tracks, all stunning and each has a different story to tell, and leaves a mark on the listener. This EP begins with a positive guitar playing in the song “Where We Belong”. It already puts you in state of ease, as Justin’s voice plays through the speakers, with the beautiful melody and music in the background. The body of Be Human consists of “Without You”, “While The Fire Was Out”,” That Girl”, and “Be Human”. “This Girl” is one of the more stand out tracks on this album. The cute lyrics and the way Justin’s voice seems to fit the song so perfectly is mind blowing. Be Human ends with the gorgeous track “I Lost Her”. It’s a beautiful ballad, and in a sense sad. It ends the EP with a sympathetic feeling. It’s such an amazing EP, bringing out the best in Brighten. They’ve done such a great job and gone such a long way and this proves it.

This follow up to Early Love and King vs Queen was great. Brighten’s music is extremely influential, and words can’t exactaly describe how great it is. Each listener gets their own point of view, thoughts, and story out of the music. That’s just the beauty of it. This is a must listen EP and I promise you, you will not be dissapointed in what you hear.

Be Human is now up on Itunes and Amazon for purchase! For more information on Brighten or Be Human check out http://myspace.com/wearebrighten