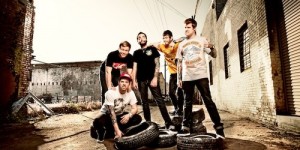 With their new album, Common Courtesy, set to release on October 8th, Jeremy McKinnon recently shared in an interview with Alternative Press that Victory Records is trying to strep in the way of the album being released. You can read his lengthy responses during the interview below.

There are rumors circulating that the album will be self-released. What can you tell us about how the record will be released?
I’ll be honest with you, I don’t really know. I see all over the internet and music sites, people are saying, “Oh, this is going to ruin their career, there’s no preorder up, they’re stupid, they’ll never be the big band they could have been,” etc. How about this: I’m not going to allow someone to sit on my career and ruin what may be our best album for people. Fans want our music.

As of last week, we got the final master. I was telling people forever that the record wasn’t finished, wasn’t mastered and wasn’t mixed. It’s finally done. They’re going to start pressing it pretty soon. We’re doing it ourselves, that’s all I can say. We have a system set up where we will distribute the record when we’re allowed to, but someone is trying to stop us from doing that. We announced that we were going to put out the album, and immediately, someone tried to take that from us. We knew that we had to, though. If we don’t put it out, it could end our career.

People move on and I don’t blame them. The situation is what it is. For us in A Day To Remember right now, it isn’t about what everyone else is thinking in the public. It isn’t about our first-week sales. It’s about how many we sell in the long run, how much people care and how much people like this album. That’s what it’s about. We don’t give a shit about being the biggest band in the scene with the big first week. We’ve sold a good amount of records and had good first weeks before. We have a loyal fanbase that supports us and, in our opinion, all that matters is getting the people who care about our music the new record. We’re going to do that in any way we can. We don’t care if we have to put out an album the day of October 8 and it’s only available digitally. Whatever we have to do to get these people this music, we will do. We want to put our music out, and we want to go out on the road and tour on it.
The way that people react and support a record should matter more.
It does! And there is no one right way to do this. It’s music. Our situation isn’t ideal, but all we care about it getting the album out. We’re going to do that as fast and in the best way that we can. Like I said, it’s definitely not ideal for us. We self-funded this album. We built a studio in my house because we weren’t given our allowance for this album. We’re in a lawsuit. [Victory Records owner Tony Brummel] owes us a lot of money, and he stopped paying us what he owed us. We were completely cut off. We were off of the road for almost a year straight. Think about what that would do to you, if you were out of a job for a year and bleeding money because you were spending tons of money on building a studio. You’re also putting all these people to work to make this record with you—and it lasted for eight months. That’s not cheap. We paid for all of this out of our pocket. Then there is this guy sitting somewhere who is just trying to ruin our career. All we care is about getting our fans this record in any way, shape or form. Hopefully, they’ll like what they hear. If they do, we believe that they will support us through this album cycle. After this album cycle, all this crap will be in the past and we can move forward like a normal band. At the end of the day, if the music speaks for itself, and we really put out an album that people care about, then none of this bullshit will matter. All that matters is the music.

Maybe people will think we are cool because we didn’t try to sit on our album and make a bunch of money. I hope people understand that when this comes out, we will be in a weird position as a band. That doesn’t matter to us. All that matters to us is just playing music! We never started playing music to make money. We never started any of this for any other reason other than we love the music and we love what we do. We love this band that we created, and we love playing shows. We love to make people laugh and not take ourselves too seriously. People can actually find meaning in our songs, and that is so much more important to me than money. I think that is why we’ve been so successful. People need the realness in all of this stuff and to see that it’s genuine. I don’t think any of this will matter if people like the music, and hopefully, they do. We’re going to get it to them as soon as we physically can.