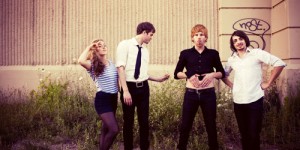 Fueled By Ramen indie rock band The Hush Sound have announced that they will be performing a reunion show on Feb. 3rd and 4th at Bottom Lounge in Chicago, IL. The band will be performing a set of their entire second album “Like Vines” on one day and a set of fan’s choice songs on the next. Supporting the shows would Santah and Empires on. It’s been over two years since the band announced their hiatus. Get your tickets here.