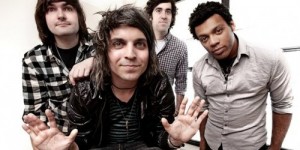 Fueled By Ramen band the Friday Night Boys have decided to call in quits. You can read lead singer Andrew Goldenstein’s statement below.

After three and a half years as band, The Friday Night Boys are officially splitting up. Many of you know that things don’t always go the way they are originally planned, but it is a decision we all agreed upon. However, I would like to take note of the positive experiences we had as a band, as well as with fans and friends.

We would like to thank all of the people that took the time to listen to our music, come to our shows, buy our merch, and talk to us. You all made flying down a highway at 4am pounding red bulls in a puttering old van much easier and enjoyable. Especially those of you who saw us time and time again all over the country. It was an honor to see your familiar faces whenever and where ever we showed up. The lovely FNB fans brought us all the Cheez Its, cookies, cupcakes and gummy worms we could eat! I think I’m good on those foods for a few years at least. So thank you.

We were able to live our dreams because of you. We would also like to thank our label, managers, friends, other bands, and family for being so supportive and helping us in every way.

So what’s next? Chris will be releasing solo material that you all should check out. Mike is releasing a project called Time Travel, and the first show is November 2nd at the Ottobar. Robby will be performing with him as well as working in a congressman’s office and playing music in other capacities. I currently do not have plans of releasing a solo project or playing in a band anytime soon, however, I am writing and producing for other artists and bands. I’ll let you all know what’s up on Twitter.

We would like to offer special prices for everyone to pick up our remaining merch. Head to The Fueled By Ramen Webstore to get t-shirts for $5 and hoodies for $15 through October 18th. We will also give out an autographed copy of “Off The Deep End” to a random customer each day during the sale! Thank you all for the support you have given us over the years!