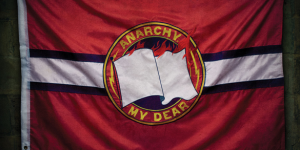 Say Anything will be releasing their fourth studio album Anarchy, My Dear which was produced by Tim O’Heir on March 12th, 2012. This highly anticipated album is sure to be Say Anything’s most impressive release. With several amazing songs including a feature guess vocals from Sherri DuPree, this album is sure to be a favourite of 2012.