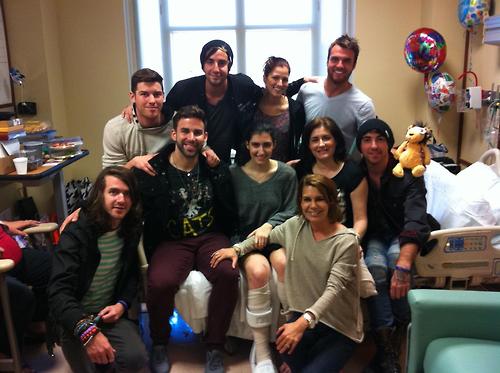 Mayday Parade, All Time Low and Cassadee Pope recently stopped by and visited a fan who was injured in the Boston bombings.

Lowell High School senior Sydney Corcoran was supposed to be going to a fun punk rock show with her friends last night at the Tsongas Arena.

But like so many in Boston, her plans drastically changed on April 15, when terrorists bombed the Boston Marathon.

She and her mother were standing near the first blast, and the 18-year-old suffered shrapnel injuries that nearly killed her, while her mother, Celeste, lost both legs.

Last night, instead of going to the concert with three of her best friends, she was recovering with her mother at Boston Medical Center. But she got a special surprise yesterday when members of two of the bands on the bill — Mayday Parade and All Time Low — dropped in to visit her in the hospital.

“It’s the absolute most sweetest thing anyone could do for anyone,” Sydney’s friend, Sarah Cassella, told the Herald. “She loves them. I’m just so happy she met them. She deserved this. She’s been so excited about this concert. This is like the best thing. She’s so happy that they even did this. It’s unbelievable.”

“It was an incredible experience,” the singer told the Herald. “She’s a wonderful person, and her family just showed incredible spirit.

“To see a family that’s been through a life-changing thing like that, you imagine just how devastating it can be,” he continued. “But to see them laughing, smiling, joking and just having hope was so inspiring.”

You can read the full article here.