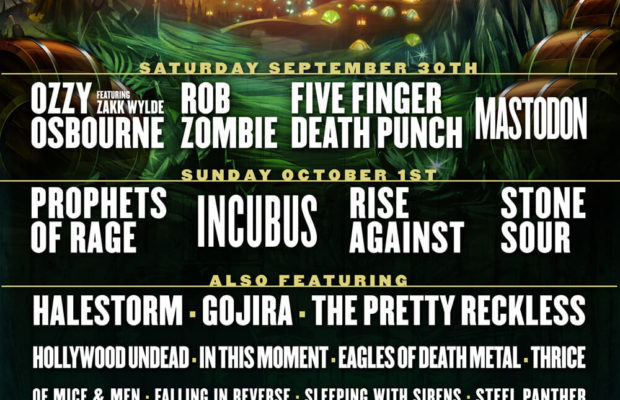 The fourth annual Louder Than Life Festival makes it’s way to Champion’s park in Louisville, Ky on September 30th and October 1st for two days of incredible rock music.  The festival was created by the nationally recognized and respected music festival production company Danny Zimmer Presents, who also handles such festivals as Rock on The Range and Chicago Open Air.  Headlining the first night of the festival, Ozzy Osbourne reunites with Zakk Wild for the first time in over a decade.  Five Finger Death Punch, Rob Zombie and Mastadon are among some other the other bands rounding out the first day’s lineup.  Prophets of Rage, who are excited to make their way back to Louisville after a long absence, headline Day 2.  Incubus, Rise Against and Stone Sour are among the many bands rounding out the lineup for the final day of the festival.  Other bands on the lineup include Eagles of Death Metal, The Pretty Reckless, In This Moment, Gojira and many more.  Any rock music lover would be hard-pressed to find a better festival lineup.  In addition to an incredible lineup, the festival features many other activities and offerings such as a wide selection of award-winning bourbons, spirits, craft beers and a variety of local food offerings.  You can find the complete lineup, contact information and answers to many general questions, as well as a link to purchase tickets, at louderthanlifefestival.com.