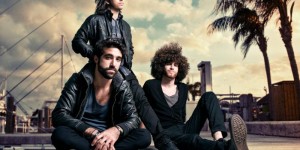 The Florida based trio Jacobs Ladder will be releasing Ring Ring via Little Heart Records. Ring Ring is going to be released on a 7″ vinyl, which will be split equal between orange and yellow wax, and there will also only be 500 copies in it’s first pressing. Head here to pre-order the record. It will officially be out on December 13th, along with the digital version with the vinyl, or else through most digital outlets.