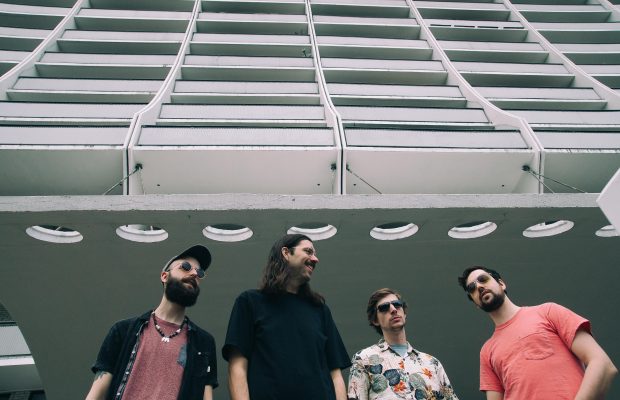 Feather Weight before it’s current form started out as a nameless creative outlet by Alistair Bundale to reflect on the world today. After some time Raymond Cara came on board, bringing in guitarist Neil Culbert and bassist Jordan Quinn, the 3 having a history of musical projects together. In July 2018 Feather Weight was born.  Merging various influences from their musical backgrounds, particularly blending over a love for garage, psych (old and new), shoegaze and dreampop. After releasing two singles in 2018, “Just Take The Pill” & “Volcano”, and playing shows around the Toronto and southern Ontario area, work began on writing and recording new material over the winter. The first release “Something Else” makes it’s premiere today, followed by the debut EP “Slipstreams” on July 5th.  “Something Else is about the relationship between the ‘us’ we show to the world and the ‘us’ that we don’t, and the complexities of interweaving those two worlds.  Emotions and occurrences that we prefer not to deal with or those we simply cannot process get buried and bringing it to the surface can cause pain or anxiety, or sometimes joy and relief.  The video uses some old clips from the 60s (because why not) in a dissociative way to try showcase the overall message while remaining opaque.  I see the footage as a ritualistic process, trying to cross over into some other realm, representing our inner desire to attain meaning and substance and delve into the deeper subconscious of existence”, says the band.  You can follow Feather Weight and stay-up-to-date with all upcoming news, music and tour dates via the following links:
Bandcamp | Facebook | Spotify | Instagram | iTunes/Apple Music