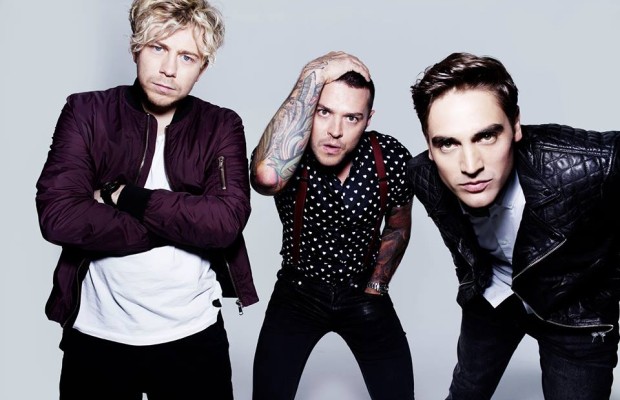 Busted have reunited for a 2016 UK tour. Read the long statement from them below and head here for the list of confirmed tour dates and a short video documentary.

Almost 11 years after the mega-selling, double-Brit-winning pop-rock trio said goodbye after a record-breaking 12th show at Wembley Arena, James Bourne, Matt Willis and Charlie Simpson are back together. The reunion that many – including, to be fair, the band themselves – said would never happen? In 2016, it’s happening, and happening in 13 British arenas.

“Why are we here?” ponders Simpson, the guitarist whose departure precipitated Busted’s demise after four Number One singles, two albums, five million record sales and that run of 12 sold-out Wembley Arena shows. “Because a year ago James and I got together and just started hanging out. It really has been 10 years since we hung out; we’d talked on the phone a few times, and met a couple of times. But there was this huge void of time where we just didn’t speak. Not because he had any issues but I was off doing my own thing, and he was busy, so we just drifted apart.

“And we just started… getting on,” he smiles. “And it felt really different, somehow, to how it had ten years ago. And the idea crept into my head after all that time apart: what would Busted look like today?”

Bourne, guitarist and the band’s main songwriter, admits that, for a while, he too was similarly pessimistic about the return of the band he had co-founded in Southend-on-Sea in 2000. “I thought it was dead and buried when the band had been gone for five years. There’d be rumours in the papers about the band coming back, then Charlie would issue a statement saying, ‘no way, but I wish Matt and James all the best…’ And I thought to myself, ‘wow, he really must have hated it… he’s never coming back.'”

“When I left Busted I felt I had so much to prove,” Simpson admits. “I was unhappy with the way we were perceived – people questioned whether we wrote our songs, whether we would play our instruments, whether it was real. That was incredibly tough for me to take.

“It came down to one fundamental issue: the band was a true representation of me and Matt as artists,” remembers Bourne. “And in the second year that wasn’t the case for Charlie. His passion drifted, just when the band were at their peak. He thought, ‘this isn’t me.’ Or: ‘This isn’t what I want for me right now.’ And I completely respect that, even though I was sad because I really wanted him to stay. If someone told me I couldn’t do a project I was passionate about, I’d tell them to fuck off too.”

“I know where Charlie’s head was at the time,” adds Willis, “and I don’t really blame him for it.”

As all three stress, there was never a big bust-up, a stand-off, a falling out. It was the age-old “musical differences” that scuppered Busted as 2004 turned into 2005. After Simpson announced that he was leaving to devote himself to Fightstar, Bourne and Willis considered carrying on. But Busted had enjoyed a short, intense and perfect ride. Why risk spoiling the memory by limping on as a duo, or with a new vocalist/guitarist?

There were repeated music industry offers for a Busted reunion, so around three years ago, Willis and Bourne visited Simpson in his London flat.

“We just wanted to get a proper face-to-face answer about where his head was at,” recalls Bourne. “If we were going to do something, we didn’t want to shut out the possibility that Charlie might get involved. But he still said no. So there was a little bit of tension… But it was funny – we were sitting in his garden and he had a Spotify playlist on. And all of the songs on that playlist, I liked them all – everything from Phoenix to Bruce Hornsby! And we said, ‘this is weird, we listen to all the same music…'”

“That day in the garden, it was literally every song – ‘oh yeah, I like that song!” laughs Simpson. ‘I was like, ‘what!?‘ And I remember saying to my [future] wife that night, ‘God, it’s so different than it was it at the end of Busted, five years ago… James and I now had this creative common ground.'”

“I had to show people there’s other elements of who I was,” states Simpson. “And now I’ve done that I just feel so much more relaxed. And I can be here and enjoy it – and all that stress I remember from before just isn’t there. So in the last two years I felt like I went through a massive therapy session, of getting back to realising that actually Busted wrote great pop songs and it was a really great time. And the idea of doing it again is exciting. It’s the most unbelievable journey.

“And this is a progression, a new thing,” he affirms. “This is not just a nostalgia trip, or me cashing-in. If I’d wanted that, I would have done McBusted. And that’s so far away from where I am. But the prospect of performing the old songs is still exciting for me – especially as that leads us into the idea of writing and recording new songs together.”

Willis echoes that sentiment. “Charlie was very quick to talk about new music, which was very exciting for me. The idea of going out and playing the hits again is fantastic, especially with him – but making new music is more exciting still to me and James.”

Over the summer of 2015 the trio met up in a studio in secret. But just to ensure no word or Instagram pic leaked, they met up in… Philadelphia.

“Firstly because it’s the city of brotherly love,” laughs Bourne.

“…and also, James’ mate Eric has a studio there,” adds Willis. “We flew into New York, then we road-tripped to Philly, and we had four amazing days in the studio.

Those four days produced three new songs. More importantly, almost, was how readily the three locked back into their friendships.

“That’s what made this awesome: it was easy,” says Willis. “And I remember coming back and my wife saying: ‘Did you talk, did you get everything off your chests?’ And no, we didn’t. So much has happened since we left the band, and I feel like time has taught us all exactly what everyone else was going through.”

So, yes, they’re bristling with song ideas. Yes, they would love to do an album (and studio time is in the offing…). Will they look for a new record deal? Do they need a new record deal? There will be no hurried, panicked decisions. Things were helter-skelter mad enough the last time round – and for sure, they still have ground to make up – that no one’s rushing anything.

The most important thing is that James Bourne, Matt Willis and Charlie Simpson are together again, older, wiser… and excited about what The New Busted might be. All for one, and one for all.