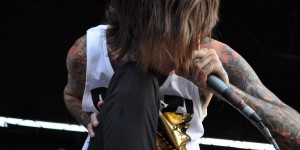 Bring Me The Horizon’s new album “There Is A Hell, Believe Me I’ve Seen It. There Is A Heaven, Let’s Keep It A Secret” will be released on October 4th, 2010. Along with that they will be touring the UK, United States, Australia, Europe, Japan and more. Tour dates will be released in October.