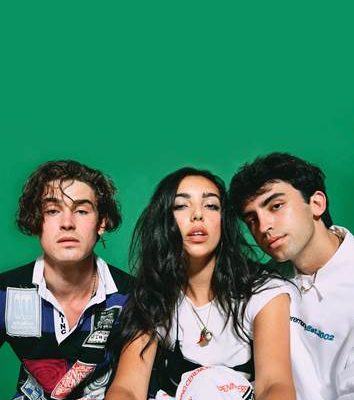 Los Angeles dream pop trio BETWEEN FRIENDS have released their latest video for “u can still come over”, a track that joins their 3 previously released tracks “iloveyou”, “better friends” and “affection”.  The video captures the beauty and madness of young adult life in the suburbs of the valley.  Known for their laid-back and lo-fi sound, the band will be releasing their debut playlist ‘we just need some time together‘ on March the 20th via Better Sounds/Z Entertainment/Sony Music.  The band is comprised of siblings Brandon and Savannah Hudson and drummer Brennan Benko.

“‘u can still come over’ is a love letter to our past relationships that mean something to us and always will even though they’re over. Walking through these memories almost feels like sinking into a cold pool in the summer. We were playing around with tons of textural, watery synth sounds and dry percussion. The goal was to make the track pulse, but we also wanted it to sound like it was dripping wet,” shares Brandon Hudson.

Recounting the process behind the self-directed video, Savannah Hudson explains, “we loaded up our car with six of our friends, a few cameras and some lights. The lyrics to the song make us feel as if we are coming into a warm home on a cold night and we wanted to capture that. After seven hours of being snowed in at Big Bear, CA, we had a finished product that not only felt true to the mood of the song but also reminded us of what we love the most about creating art, doing it between friends.”

You can follow the band and stay up-to-date with all upcoming album news and tour dates via the following links.