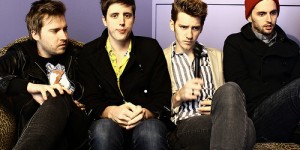 A Rocket To The Moon has been highly praise for joining forces with Never Shout Never’s Time Travel Tour kicked off their first show,  on September 22nd in Denver, Colorado. But for those who has never heard of ARTTM then here is your chance to become a fan of their music! A few fun facts, the band shared the stage with Hanson, All Time Low, Mayday Parade, 3OH!3, Motion City Soundtrack, The Maine, This Providence, We The Kings, Secondhand Serenade, Hit the Lights and the list continues to grow. They are a pop rock band who released The Rainy Sessions EP including a cover of Beyonce’s hit wonder, “Single Ladies.” ARTTM, most recent single, “Like We Used To” from their On Your Side album blew up on YouTube with unique fan covers, homemade videos based on this song and you can view on your television screen too. Even though, the band is working very hard to meet all their fans across the globe, they have been partnered up with organizations including the Keep A Breast Foundation, Kaboom! and the Take Action Tour, and take a look of what what they have to say about “Giving Back” with Kaboom! (non-profit dedicated for America’s children to create playspaces) check out here!

A Rocket To The Moon’s latest music video (above), “Like We Used To” // view here.

A Rocket To The Moon on Smartpunk Session  (above), cover of “Jolene” by Ray Lamontagne // view here.